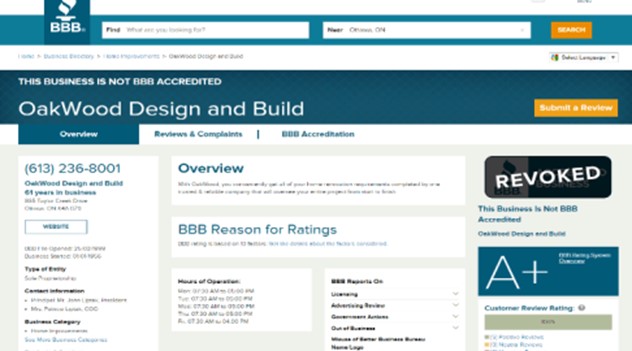 OakWood Designers & Builders, Ottawa’s first contractor to measure up to the stringent standards established by Canada’s superstar Mike Holmes, had its status unexpectedly revoked by the BBB in May of 2017. Repeated efforts by OakWood, which previously enjoyed an unblemished A+ rating with no valid complaints and over 60 years of business, have fallen on deaf ears by the BBB.

Sadly, OakWood loyal customers have disclosed this situation is being misrepresented by competitors who have tried to use this to their advantage, even a large west-end competitor. “We consider the reputation of our company to be sacrosanct,” comments John Liptak, President & CEO of OakWood. “For six decades we have worked very hard, often with the BBB, to raise the bar in the construction, new home, and renovation industry,” he adds.

After getting nowhere with the Ottawa BBB, and in the interest of protecting OakWood’s sterling reputation, the Liptak family, decided to take matters into their own hands. In June 2017, OakWood filed a formal legal claim against the BBB claiming specific practices and actions that have unfairly damaged the company. “We take no satisfaction in filing a legal complaint”, says Patricia Liptak-Satov, OakWood’s Chief Operating Officer. “For over 50 years, OakWood has held the BBB in the highest esteem,” she adds.

John Liptak also says OakWood has previously recommended to all potential clients that as part of their due diligence for choosing a trustworthy business, they check a potential builder’s status with the BBB. “Until recently, we prominently featured the BBB visibly in all our marketing literature,” he laments. Ironically, OakWood is the only Ottawa company to have been honoured with the BBB’s coveted Torch Award for Marketplace Trust – not once, but twice – and has been a finalist four times. “These awards are a matter of record,” says Liptak.

Despite this impeccable track record with the BBB, OakWood now finds itself in the uncomfortable but necessary position of having to take legal action to protect the company’s reputation and confidential information, which is second to none in the City of Ottawa, Canada. OakWood is the gold standard in Ottawa custom homes and renovations and has won many of the top awards in the industry. OakWood’s legal claim against the BBB includes the following:

The BBB divulged and emailed sensitive process and confidential information about OakWood to the owner of a direct competitor.

This information was included in confidence as part of OakWood’s winning submission for the BBB’s Torch Awards – ironically for Marketplace Trust.

The owner of the competitive business is also a member of the BBB and is a large direct competitor to OakWood located in Ottawa west.

Although a BBB board member has since been removed, the damage has clearly been done and the BBB hasn’t been held accountable for its actions.

Liptak-Satov is particularly concerned about the BBB’s actions and lack of communication, noting OakWood has invested significantly in unique proprietary processes to ensure they consistently deliver the highest quality Design and Build services in the industry. “We were alarmed and deeply concerned when we discovered the BBB’s indiscretion by providing our confidential company information to a key large competitor,” she says.

John Liptak is even more forceful on this point. “As a long-standing and highly respected Accredited Member we felt obligated to seek an explanation around this matter,” he says. Most smaller companies would simply roll over, but OakWood is the largest custom design and build firm in Ottawa. The OakWood Group of Companies is larger than the BBB and has the financial wherewithal to hold the BBB accountable.

In the interest of transparency – not only for OakWood but other Accredited Members – OakWood chose to take legal action to force disclosure of this unfortunate and damaging incident. Sadly, the BBB’s response to OakWood’s objections was to revoke OakWood’s membership. As of today, a visit to the BBB’s site (www.bbb.org), will reveal a fake, unsubstantiated review and a “Not BBB Accredited” stamp emblazoned on the listing. “We do take some satisfaction in noting that you can still clearly see, directly under the harsh “Not BBB Accredited” status, our A+ rating. More importantly, we assure you that OakWood’s commitment to unconditional customer excellence has not waivered. To punctuate this fact, and to this day, OakWood still does not have one valid, legitimate, substantiated complaint with the BBB, after being in business for over 60 years. OakWood’s commitment to the highest quality, transparency in its dealings with clients, suppliers, trade partners, and contractors as well as innovation are just a few of the reasons that OakWood has been chosen as Ottawa’s consumer choice winners every year since 2008. At this moment, OakWood is continuing its legal claim against the BBB. “When the full details of this become public, we believe that many people, particularly in the business community, will be shocked by how poorly the BBB has acted,” notes Liptak.

The tragic irony, in this case, is that the catalyst for OakWood’s lawsuit involved a breach of trust and confidence in the BBB regarding their handling of confidential company information that was supplied for their Torch Awards for Marketplace Trust. This program is designed to promote professionalism and recognize local businesses deemed outstanding based on their integrity in performing and promoting trustworthy business practices.